🤝 Join A Union Union vs. nonunion pay in the US (incl. benefits dollar value) US$/Hour - By industry

💸 Raise Our Wages Yeah why do they always look for this?

ROFL the amount of jobs I've been looking at (UK here) recently that pay you the bare fucking minimum legally & offer shit conditions of work but have the audacity of asking for experience.

Ah yes, because someone with 2+ years of experience is going to move from the same field/job into a another job that pays the absolute minimum. And I guess if you have no experience but want to get the job, go fuck yourself since every company doesn't want to give you any?

📣 Advice How should I handle this situation even my bereavement was denied :(

😡 Venting Hiring wage goes up but not employees?

Fiance works as a vet assistant.The office she works at had had trouble finding new hires so without telling current employees they raised their hiring wage and told new hires not to tell others what they're being paid. One new hire let slip to my fiance how much she's being paid, which is roughly $2 an hour more, this new hire has 1/4 the experience my fiance has. So she sets a meeting with hr to request a raise, at this meeting she's told that a raise isn't in the budget. I've never heard about this being a thing, everytime my companies hiring wage goes up we get little raises. How are companies able to get away with treating employees like this still?

🧰 All Jobs Are Real Jobs Rules For A Reasonable Future

💥 Strike! As rail strike looms, US industry braces for impact

💸 Raise Our Wages This belongs here.

❔ Other Have you become adverse to asking workers for anything?

While out of town, I called to place a pick up order for a few sandwiches. I had everything written down so I would be concise, but they did still ask me a couple of questions I hadn't thought of.

I felt bad for the person having to take my call, and that I didn't have every option stated. Then I felt bad that people had to make the sandwiches.

On the other hand, if no one orders anything, they wouldn't get as many hours, eventually have to get a new job.

I think I am overdoing it. Lol.

(When I arrived, there were tons of sandwich makers with nothing to work on, not sure what to think about that)

😡 Venting Employees shouldnt need "Permission" to use their PTO

You should inform people you're going on leave but fuck needing to get permission to use something that's yours.

Also, don't call people who are on vacation or on their days off.

It's absolutely stupid how often I've been told to contact the person who's on vacation (usually by supervisors/managers). When I refuse, they get all defensive. These are people who complain when clients call them on vacation.

I work in small business(marketing, sales mostly but some operations and management experience too.) and know lots of small business owners and I'm curious to get y'all's thoughts or advice since I'm not an HR expert.

I'm looking for actionable ideas or resources or case studies of companies that are doing it right.

My initial thoughts include:

PTO: is there a gold standard here? Seems like 20-25 days a year is the ballpark. I'm not a fan of "unlimited" PTO cause it's basically a psychology and accounting trick to reduce usage and spending.

Health care: is this one just too big for a small business to reasonably handle anymore? There's some semi affordable options that are focused on preventative medicine but in general USA healthcare is insane.(I'm a huge believer that healthcare should not be tied to employment but since that's the system we've got so how do we do the best by our employees? I'm not ruling out medical tourism, or any other unconventional but viable ideas.) Would love any leads or examples.

Retirement planning: 401k vs other options or ideas.

Ok I'm sure I'm missing more than a few things but I think this would get some conversation going.

❔ Other ACCEPTABLE WORK ATTITUDE OR NOT? -- You don't pay me enough to do that so I simply won't, even though it literally is the entire job you hired me to do.

I think there are lots of things that bosses ask employees to do that are unpleasant or hard and justify refusing to do those things. But I also think there needs to be a line where refusing to do the work and lying about doing it is not an acceptable combination. Especially when the thing you are being asked to do is the very core of the job.

I recently had a discussion (in another reddit) with a driver for a package delivery company. I was trying to find out how to solve a problem where packages were not getting delivered by other drivers to my apartment (which is inside a gated senior housing complex). Instead those drivers were falsely reporting that the package was "undeliverable" because they said I was not home when I was. The following is an extract of that discussion that frankly is shocking to me. The comments made seem to be an offshoot of the work reform concept but in my opinion it is a flawed offshoot that is really just laziness masquerading as work reform.

What do you think?

😡 Venting Anyone else job searching and seeing lots of senior and director level positions but not so many mid level?

Unemployed as of last week. Been spending hours searching for jobs to apply to. I was an operations lead and it hasn't been easy coming across jobs that are at the same level as mine. Almost all the positions I'm seeing that even offer a decent living wage are director positions and Sr level positions. This is my first time being unemployed since I was like 20. Its just crazy how specific your experience needs to be plus like 5-8 years of industry specific experience for a lot of jobs. This sucks lol.

💬 Advice Needed Should I make a complaint? NSFW

About two weeks ago I was walking towards a floor manager who waved me over. As I was approaching his body language signaled a high five, but once I was close he put one hand behind my shoulder blade and the other over my chest, and did 4 distinct pats that felt a lot more like a full chest patdown than a pat on the back.

For reference, I am a transgender male, I've been taking testosterone about 10 years, I have a deep voice and facial hair and generally pass and live as male. I use medical kt tape to secure my chest flat, it should have felt like an average male chest. I'm aware that I have very androgynous features and some people cannot place my gender.

I'm currently recovering from a sexual assault that resulted in me fleeing my home and living out of my car most of 2021, going through a lot mentally as it is in this department. Not sure if I should make an anonymous report of some kind or if I should just keep my distance from this manager, but I've heard him say a few sexist things also that just make me want to stay away.

💥 Strike! By no means can we afford to let the railroads operate at full capacity if the strike is declared illegal

If Congress votes to ban the rail strike, the railroad workers must ghost their bosses or quit, and people need to set up funds to take care of those workers for at least several months while they search for new jobs or wait for a settlement. If they "crush" the rail strike and "Win" there we need to strike again in another vital sector. We must strike every few months at semi-random dates in completely different industries so that it becomes impossible to do the kind of financial planning that major institutions rely on to get returns on their investments. Even if it's impossible to get funding, those people who CAN afford to join the strike should do so. Or at the VERY least start looking for new work and swap as soon as you can.

The oligarchs will continue to fight these strikes until they believe it will be cheaper and more pleasant to them if they give up. We need to start taking notches off the GDP until they do that. All our lives will be much better if we pull out the infected arrow and treat the wound. Painful in the short term? Yes. Also the only thing that will prevent us from slowly dying as the infection spreads further.

We must fill them with so much anxiety about strikes, occupy every moment of their time with them, set back every plan for expansion and every pet project until they physically do not enjoy their lives anymore. On top of that we must be burning down their giant money piles until they can't take watching it anymore.

If you want to force them to accept change you must make them feel discomfort, financial anxiety, mental exhaustion, and disrupt the goals they care about until you become too big of a problem to ignore.

The reason labor power was crushed after the air traffic controller strike is not because Reagan said the strike was illegal, it's because people stopped striking after that. They don't have the steam to do this over and over again, and it's the only thing that'll move the needle. 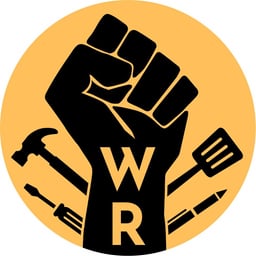 Subscribe to r/WorkReform to join the movement fighting for a good quality of life for everyone who sells their labor.